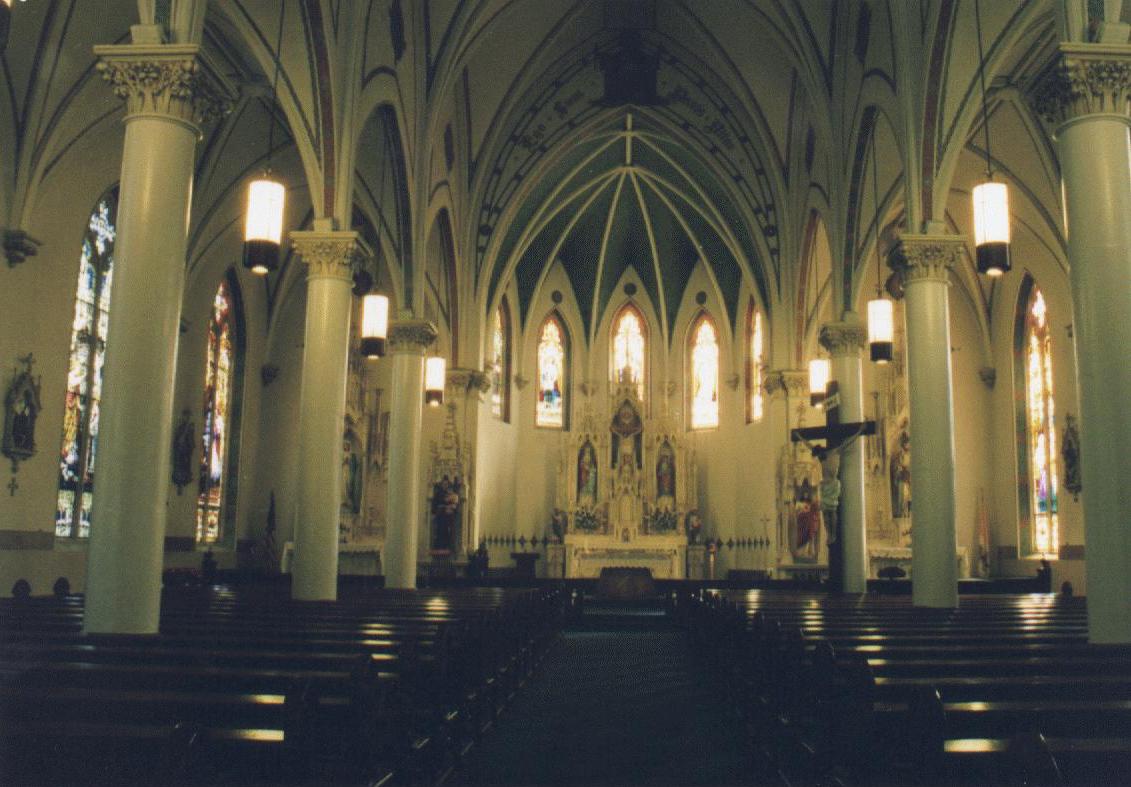 Catholics were the first denomination to leave the Vereinskirche, the community church in the Market Square of Fredericksburg. That first community church was built by the Adelsverein, the German Society of Noblemen, in 1847.

A log-house-style church was built in 1848 on the same property where they began building the larger native stone church in 1862. An Indian was asked to ring its bell when it was dedicated in 1863. After the Civil War additional streams of German Catholics came to Fredericksburg. By the turn of the century the need for a larger church was met with enthusiasm. Still known as "new" St. Mary's, the church provides a classic example of Gothic architecture and was consecrated on November 24, 1908. Its principal architect was Leo Dielmann of San Antonio, with the contractor and builder, Jacob Wagner of Fredericksburg.

Built of native stone quarried near the city, the total cost of building and furnishing the church was around $40,000.

Still fully functional is the original pipe organ built by George Kilgen & Son of St. Louis, Missouri. It was installed in 1906 as a pump organ and has been completely electrified.

The beautiful stained glass windows were added around 1914 and 1915. However, the windows in the sanctuary were put in sooner. The two windows, depicting a boy and girl in their first communion outfits with their guardian angels, were made in Germany from actual photographs of two children who died at an early age. The boy is James, son of Mr. and Mrs. Robert Blum, and the girl is Erma Wagner, daughter of the contractor Jacob Wagner and his wife.

The altars are made of wood with an inset of the Last Supper in the center of the main altar. It was in 1936, under the guidance of Monsignor Alfons Heckmann, that the elaborate stenciling and art work was done. Paintings of the Twelve Apostles appear on the arches above the center aisle. Though Matthias was chosen to replace Judas, one notes that the Apostle Paul was placed across from his historical counterpart, the Apostle Peter. Across the apse wall, is the magnificent painting of Christ the King with a Latin inscription that translates to read: "I am the Bread of Life." This sets the theme of Jesus Christ as the Eternal King and Priest.

On the sides of the sanctuary wall the themes are expanded. On one side is the large painting of the Righteous King and Priest Melchizedek offering bread and wine to Abraham in thanksgiving for Abraham's rescuing of Lot from an enemy attack. Thus the hint of meaning behind the word "Eucharist" which means "thanksgiving."

A Legend of the Stones of St. Mary's

On good days in Texas it is usually very hot. It was hard work gathering and shaping the beautiful native sandstone used at the turn of the century to build St. Mary's Church. A stranger happened upon the men as they were working. The story goes that this visitor might even have been Christ Himself. The visitor asked one of the men: "Was tuest Du?" (What are you doing?) The man answered, "Oh I have to haul these darn rocks!"

"Was tuest Du?" he asked another... "I don't think I'll ever get finished cutting these rocks for this huge building!"

"Was tuest Du?" he asked a third man who was whistling a nice tune as he worked, and answered: "I'm building a cathedral for the glory of God!"

The visitor blessed the third man and disappeared.