St. Mary's Church of the Assumption 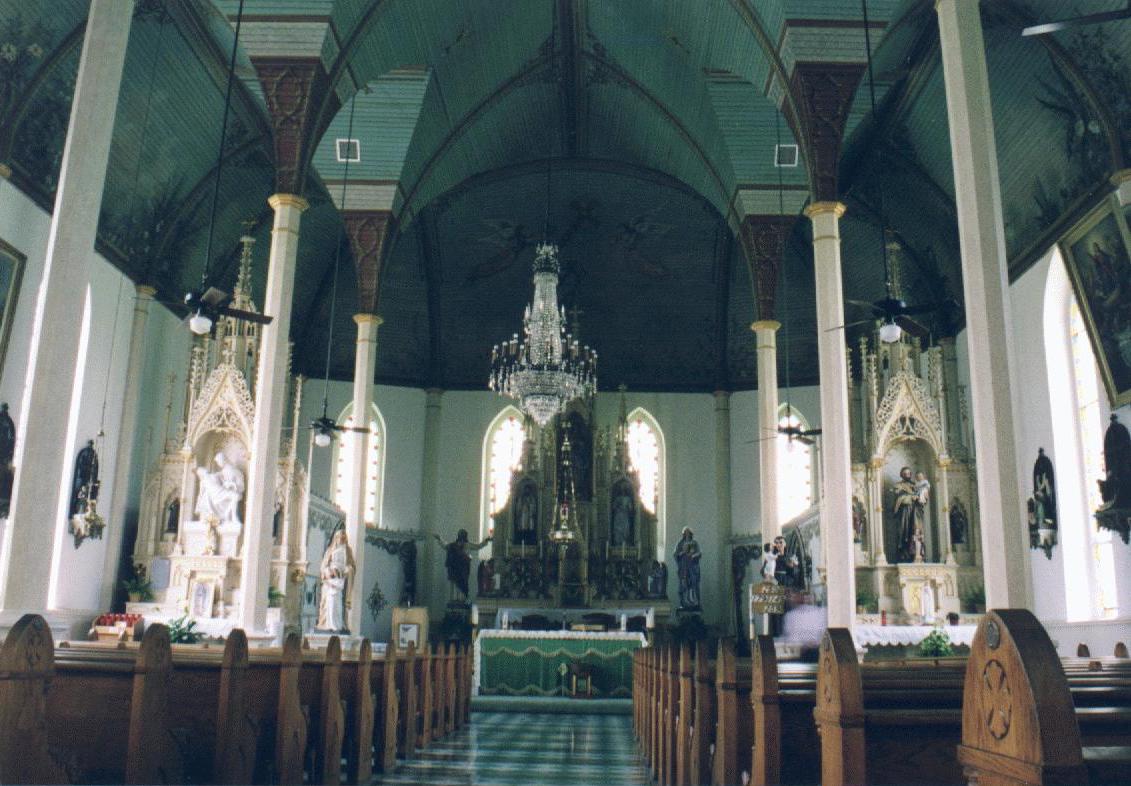 St. Mary's Church of the Assumption

St. Mary's was built in 1895, making it one of the oldest of the painted churches. It is a large, sturdy church. I imagine what a sacrifice it must have been for the early Czech settlers to build such a large edifice.

Local history says that a keg of beer was offered to the man who dared top the church steeple with a cross. At over 130 feet, climbing to the top was no doubt a harrowing feat. Evidently a man who put crosses on steeples for a living took the community up on their offer. After he bravely affixed the cross to the top of the steeple the man proceeded to do a handstand on top of the cross. Makes me wonder if he might have been sipping some of the winnings before the climb.

The front façade of St. Mary's is of stone. There is a bust of a crucified Christ in a niche above the main entrance. The bust is painted in realistic colors. It foreshadows the bright painting and exuberant decorating that awaits inside.

Ben Popelka has been lovingly tending to the church for some years now. Before one can even admire the wonderful painting on the ceiling, one must appreciate the polished floors and shiny pews of the interior.

But the eyes do wander. First to the magnificent hand-carved altars of the sanctuary painted white and gilded in gold. Then to the ceiling itself. There are several artists' work on display here.

Swiss-born artist Gottfried Flury from Moulton, Texas painted much of the interior. Flury, like many of the artists of the time, mixed his own paints and used "secret recipes" and "unique techniques" for his work. His lush foliage in bright turquoise, emerald greens and blues turned the ceiling of Praha into an earthly paradise. I remember that "Gottfried" means "friend of God." Certainly one who could decorate a church as beautifully as Mr. Flury was indeed God's friend.

The interior was later embellished by Father Netardus, a much-beloved priest who was made pastor of Praha in 1901. A 1919 article on Father Netardus in the Southern Messenger says, "Father Netardus has won wide fame as a preacher, especially in the Bohemian tongue…He has likewise cultivated with success the arts of music and painting."

I am thrilled to report that we have uncovered a photograph of Father Netardus, paint brush in hand, next to a life-sized painting he did of Saints Cyril and Methodius for the Praha church. The photo is incredibly rare. It is the only image we have been able to discover of any of the original painters of the churches posed next to their work.

One cannot help but admire the work of a more recent local artist, Gene A. Mikulik. Mr. Mikulik passed away in 1997. He worked for more than 30 years tending to a great number of churches around Praha, including Saint Mary's. Mikulik and his wife, Josie were house painters by trade. As a little boy, Mikulik remembered an artist coming in to touch up the statues of the Praha church. He was so excited watching the man tend to his craft that he was hooked. Later it was Mikulik himself who would restore much of the statuary in Praha, and add gold-leafing and new paint to the altars. Mikulik also created a striking image of the Virgin Mary called "Our Lady of Victory." The painting, which proudly hangs on the wall of the church, is of the Blessed Virgin, full of grace, hovering over the soldiers from the parish who lost their lives in World War II.