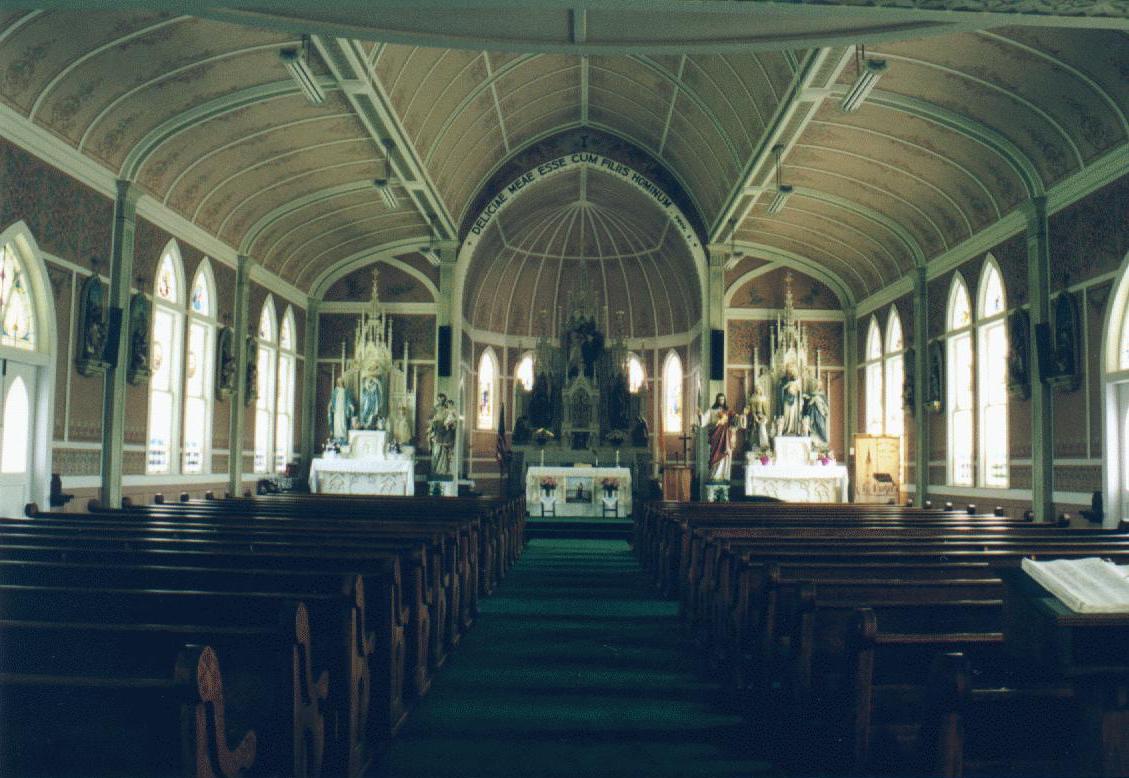 Some people say the interior of the Ammansville painted church is the color of cotton candy. Others say it is the color of Pepto-Bismol. Any way you look at it, the church is a pale, rosy pink. Legend has it that an unknown itinerant artist painted the walls of Saint John. Upon completion of the work, he vanished, never to be seen again. Scholarly research has unraveled the mystery, but let me tell you a little about the church first.

The present Saint John's is the third church to be built on the property. The first church was destroyed by a hurricane in 1909. A second church was built by High Hill architect, Leo Dielmann. The rare photographs of the inside of the church show an interior as ornate at the High Hill church right down to the marbleized columns. There are architectural plans of the second church on file at the Dielmann archives in San Antonio. They reveal an exterior that is highly Victorian -- delicate with fanciful details, almost decadent in its embellishments.

The second church burned to the ground eight years after the first one was destroyed by a hurricane. Betty Jasek, at over 100 years, is the oldest member of the Ammansville community. She recalled in a phone interview working in the fields and seeing the black smoke come up from the direction of the church. Everyone dropped their farm equipment and raced to the church. Folks were able to save some of the statues, but the rest of the building was lost to the fire, which was so hot even the church bells melted.

With two churches destroyed in such a short time, one would think the community of Ammansville would have given up -- maybe resigned themselves to worshipping with other nearby communities. Yet, they began the process of planning and rebuilding almost immediately after the fire. They built the present structure on the concrete footprint of the second church. The third church, completed in 1919, was simpler. Gone were all of the exterior embellishments of its predecessor. In the interior, they even did away with the support columns -- the space is open and airy. And the community hired a decorative painter to give the interior a little pizzazz.

The Mystery Is Solved

In the 1970s and '80s, interior design professor and decorative painting scholar Buie Harwood studied the painting techniques and styles of artists who painted churches in the area. She compared the art in some of the churches where the artists were known and determined that noted decorative painter, Fred Donecker, was the artist whose work can be seen on the walls of Ammansville. (Another one of his masterpieces is the Catholic Church in Moravia -- which we didn't photograph, but it is featured in the documentary.) So little of Donecker is known. It is our hope that a surviving member of the Donecker family, who might know more about the artist, might share his story.

Later, when the church needed some retouching, local artist, Gene A, Mikulik, was hired. Before his death, Mr. Mikulik, along with his wife, Josie, worked on maintaining many of the area's painted churches (See Praha). Josie told me that the two statues of angels that hold holy water at the entrance of Ammansville were found discarded and in bad repair in the attic of the old rectory. Mr. Mikulik painstakingly restored them. Now they proudly stand welcoming visitors from around the world.