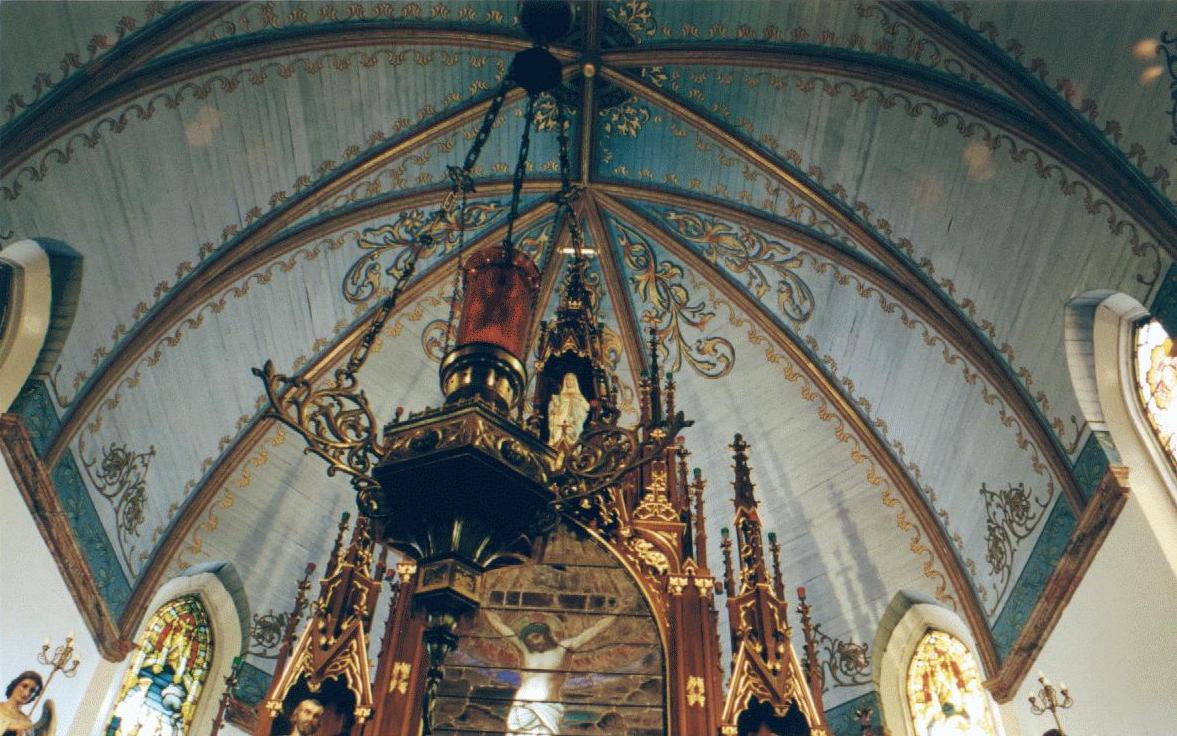 Nativity of Mary, Blessed Virgin Catholic Church is one of the first churches built by noted Texas architect, Leo M.J. Dielmann. It was built in 1906. Dielmann was the son of a contractor who already had a history of serving the Catholic Church of Texas in various building projects.

Fresh from his architecture studies in Germany, the young Dielmann designed a classic gothic revival structure for the small German settlement of High Hill.

In the late 1800s and into the 1900s, the Catholic hierarchy attempted to influence communities in Texas to build in the more practical "Spanish" or "Mission" style of architecture. This style was championed because it suited the hot climate more effectively than gothic structures. Yet, this Mediterranean style was rejected by German and Czech immigrant groups who came to Texas during this period.

This makes the handsome red brick exterior of the Nativity of Mary, Blessed Virgin that much more important. While the interior is made of wood, it is protected by a brick exterior resistant to fire and storms. From an aesthetic standpoint, the exterior of High Hill shows Dielmann's early mastery of gothic proportions and rhythms.

About the same time Dielmann's High Hill church was being erected, he took to working on another important commission. He was hired to design a church for the Catholic community in the frontier town of Fredericksburg in the Texas Hill Country.

I encourage you to compare the two structures. In the High Hill church, Dielmann relied on decorative painting to create the illusion of gothic groin vaults and joints. In Saint Mary's of Fredericksburg, which was a wealthier community, Dielmann was able to create the actual vaults using wood and plaster. The decorative painting in Fredericksburg becomes more of an ornamental embellishment, rather than a feature needed to accomplish a piece of the architectural style.

The Interior Painting of High Hill

The decorative painting of High Hill was executed by Ferdinand Stockert and Hermann Kern in 1912. They also painted the walls and ceiling of Saint Joseph's Catholic Church in San Antonio. Old timers in the parish remember their parents saying that Stockert and Kern first painted their images on canvas and then glued them to the wood walls. Today from the choir loft you can see the bubbles and now hardened canvas close up. When some first set eyes on High Hill, they say that it looks like wall paper -- and actually, in many places that is what it is.

The books Dielmann studied in the early 1900s, championed the revival of gothic over the baroque or rococo styles of Catholic church design. Whereas baroque and rococo churches have large windows that allow for a great infusion of natural light, the gothic ideal, even with walls sheathed in stained glass, calls for darkness and shadow. As spires reach up into the ceiling, the light dims. Images in the glass or carved into the walls seem more mysterious or transcendent in the dim light.