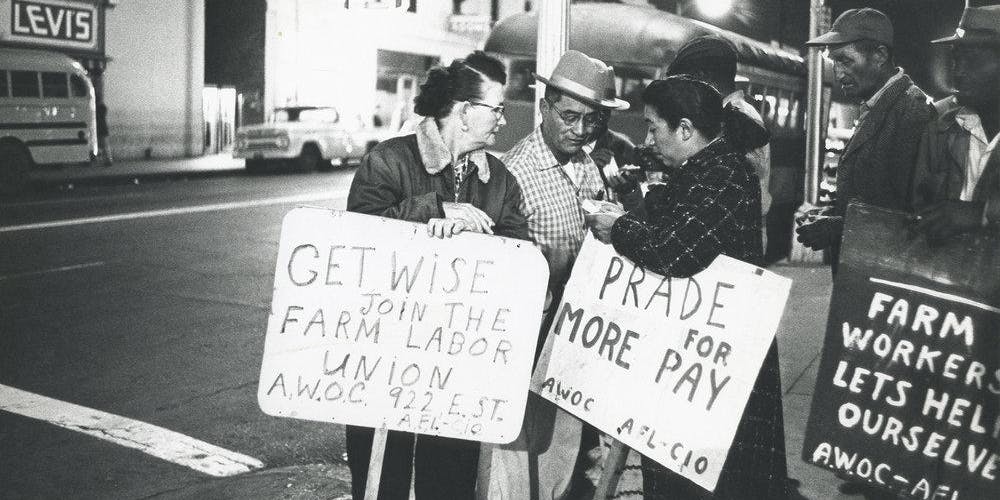 This September and October, KLRU is highlighting Hispanic Heritage with a month of programming celebrating some of the men and women who, over the past 100 years, have pushed back against racism and sexism in America with organized protests, art and mentorship.

American Masters: Raul Julia Discover the life and career of Raul Julia, the charismatic, award-winning actor. Known for versatile roles on stage and screen, from Shakespearean plays to the The Addams Family, he helped pave the way for many Latino actors today.
Friday, September 13 at 8 p.m. & Tuesday, September 17 at 10 p.m. on KLRU

Independent Lens: Dolores Dolores Huerta's life, from the fearless young woman confronting teamsters on violent picket lines to the activist grandmother nearly beaten to death by a San Francisco police squad, was overshadowed by the legacy of Cesar Chavez. After she was forced from the ranks of the all-male union leadership after his death, Huerta learns the painful truth — that her gender is the greatest obstacle of all. But she turns her defeat into inspiration, setting the course for a lifetime pursuit of equality for all. While tracing Huerta's trajectory through the most radical social and cultural movements of the past 50 years, from brown power and feminism to LGBTQ rights and environmental justice, this film provides a look at the barriers faced by women and people of color within the very communities they're fighting for.
Monday, September 16 at 9 p.m. on KLRU

Beyond La Bamba Through the compelling story of a young musician who leaves home to follow his dreams, Mexico’s 300-year-old son jarocho tradition comes vividly to life in Beyond La Bamba. From the rural roots of Veracruz to the urban rhythms of the Midwest, a family of iconic musicians forges a new life but remains true to their music.
Monday, September 16 at 11 p.m. on KLRU & Friday, September 20 at 10 p.m. on KLRU

Willie Velasquez: Your Vote Is Your Voice With his rallying cry of "su voto es su voz" ("your vote is your voice"), Willie Velasquez began a grassroots movement that changed the nation's political landscape and paved the way for the growing power of the Latino vote in America. He started the Southwest Voter Registration and Education Project, launching 1,000 voter registration drives in 200 cities, creating a pathway for Latinos to finally have a voice in government and underscoring the growing power of the Latino vote. In 1974, inspired by the Voter Education Project aimed at African American voting rights, Velasquez led an unprecedented effort that was the driving force for millions of registered Latino voters across the nation and numerous "get out the vote" efforts that exist today. This is the story of how a young boy growing up in the poor barrio of San Antonio, Texas questioned the lack of Latino representation in his city government, grew up to be a student activist leader in the center of the Civil Rights Movement for Latinos and then became a young Latino statesman, leading one of the most important efforts in the history of Latino empowerment in America. The film looks at Latino millennials and how their future vote will affect the American political landscape and at contemporary issues facing Latinos today and how that translates to the ballot box.
Tuesday, September 17 at 9 p.m. on KLRU

Voces: Children of Giant Explore the making of Giant and its powerful examination of Anglo/Mexican-American relations. In 1955, Elizabeth Taylor, Rock Hudson, James Dean and a massive crew descended on the Texas town of Marfa to begin production on Giant*. Now, 60 years later, *Children of Giant explores the film's still timely examination of racial prejudice.
Monday, September 23 at 9 p.m. on KLRU

Voces: Adios Amor: The Search for Maria Moreno See how the discovery of lost photographs sparks the search for a hero that history forgot—Maria Moreno, an eloquent migrant mother of 12 who became an outspoken leader for farmworker rights. Her legacy was buried—until now.
Friday, September 27 at 9 p.m. on KLRU

Voces: Porvenir, Texas Discover the true story behind the 1918 massacre of 15 men in this tiny border town. One-hundred years later, the film asks what led to the events of that fateful night and reveals the tensions that remain along the border a century later. Locally produced by Austin filmmakers Andrew Shapter (Director, 1966-2019) and Hector Galán (Executive Producer).
Friday, October 4 at 9 p.m. on KLRU