ATX Together: Homeless in Austin

ATX Together: Homeless in Austin is now available to stream.
Homeless camps seem to be moving and multiplying in Austin creating challenges and changes as the city addresses its growing problem. Judy Maggio talks with Austin City Council Member Greg Casar, Chris Baker of The Other Ones Foundation, Susan McDowell of LifeWorks and business owner Craig Staley from Royal Blue Grocery to explore causes of homelessness, its impact and possible lasting solutions.

Our Special Correspondent for this episode is Summer W.

If you are in need of housing or you want to help local organizations that are working to solve homelessness in our community, please see the resource links below Summer’s commentary. 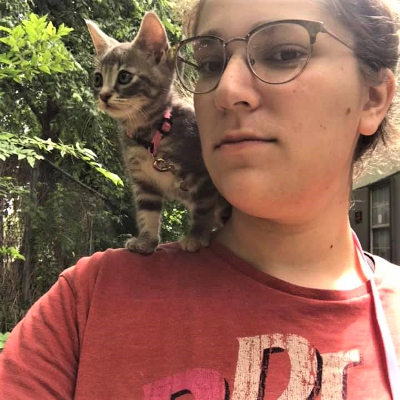 A Tale of Two Kitties

A person who goes from high school to college to a standard office job (you know, a normal person) gets to have stories — the fling with an artist in Berlin during their gap year, the college roommate who came downstairs nude at a birthday party, the hazily recalled details of their first acid trip. A young adult who has experienced homelessness gets one story. They get Your Story, and they are asked to tell it over and over and over again.

To make matters worse, Your Story isn’t much of a story at all; Your Story is a reduction of a person to a list of the worst things that have happened, with a note of hope shoehorned on the end. I don’t feel like telling Your Story today. Instead, I’m going to tell you a tale of two kitties.

I called the first kitty Kid.
I met Kid when I was sleeping in Republic Square Park, though “met” is a strong word. She was feral, reliant on her self-reliance and terrified of strangers. Her brown coat wasn’t quite mangy, and I’m sure she did her best given her circumstances. I noticed her out of the corner of my eye, and asked my friend Joe, a veteran who had been out a year longer than me, about her. He told me she lived under the wooden platform in the park where we had breakfast on Sundays.

I told Joe I was going to get some cat food from CVS with some of the money I’d made from flying my sign and feed her. He told me that she was probably well fed. I disagreed. A week before, a friend of mine who lived 1500 miles away had sent me wool socks and chocolate via an Amazon locker after someone stole my sleeping bag. As I opened the locker, I heard a man in a suit across the street use me as evidence that homeless people are secretly rolling in dough, presumably acting as loci of revulsion by choice.

Kid never got close to me. I’d open a can of food and place it five feet away from myself each night and after the security guard woke me up each morning I’d put the empty tin in the trash. I didn’t mind at all. She didn’t get less feral or more trusting in the course of the few months I stayed in the park, and I didn’t expect her to. I knew one day she might, but the process would require patience. The act of caring for Kid was a reward in itself.

I named the second kitty Mirri. She’s the grey tabby perched on my shoulder in my picture.
A few weeks after I was housed in Rapid Rehousing through LifeWorks, one of the two friends who I was letting crash with me in an effort to mitigate survivor’s guilt told me their friend had found a kitten in an alleyway. Me being a lesbian, they knew where to send her.

Mirri, barely six weeks old, was terrified her first night. She stayed nestled in a corner in the closet in her litterbox, stealing anxious peeks over its rim. It took her time to settle in and, again, I understood. I was still sleeping in my sleeping bag, in the alcove between my oven and fridge. I felt safer that way, and that was okay for as long as I needed it to be.

Over time, we’ve both adjusted. Our once bare apartment now has a bed and a cat tree. We’ve learned there’s precious little better than an uninterrupted nap and that we both have a surprising affinity for kale. When I was stressed about a new job, she was there to curl up in my lap. When I sobbed my way through a therapy session, her kisses pulled me back to reality.

I don’t know what Mirri went through during her tenure on the street, and I don’t ask. She’ll tell me when she’s ready, if ever. Like Kid, she’s terrified of strangers and has a self-reliant streak. These things may never fully go away. Unlike Kid, it only takes her a month or so to warm up to new people, and she’s not afraid to ask for seconds if she’s still hungry.

Mirri has comfort and space that Kid didn’t — space necessary to rest and to heal. She doesn’t spend her entire day worrying about where she’ll get food from next and how she’ll evade animal control in the meantime. With Kid, it was important to be there for her without expecting her to be something she wasn’t. With Mirri, I learned to do the same. All I had to do was give her the space to grow into her new surroundings.

Mirri is now nine months old, and she hasn’t stopped growing yet.

Read: More on Esperanza Community
Listen: Multi-episode podcast on homelessness, a project of 99% Invisible “According to Need”