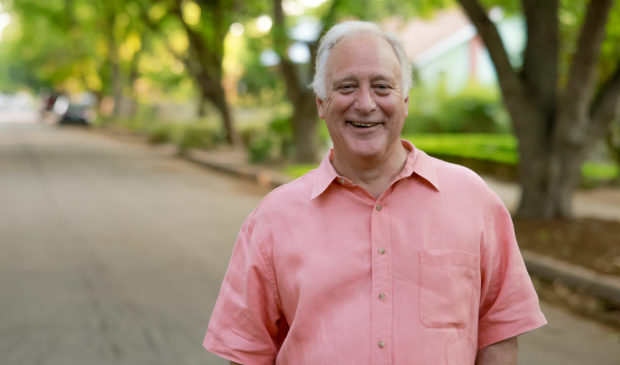 Kirk Watson, a ‘fixture’ of Central Texas, wants to be mayor again

The way Kirk Watson tells it, his career in public office started with bad news. After working behind the scenes in Texas Democratic politics and in the state bureaucracy for a few years, he was diagnosed with testicular cancer in his mid-30s. A few years later, after a successful treatment, returning to work, another cancer scare, and more treatment, he made the decision to run for Austin mayor.

“During ’96, people started coming to me and saying, ‘You’ve always loved public policy and politics. The mayor’s not going to run for re-election. Why don’t you run for mayor?’” Watson told the Texas Politics Project in 2011.

In a race where his main opponents were two veterans of Austin City Council – Max Nofziger and Ronney Reynolds – Watson emerged victorious.

After four and a half years, he stepped down to run for state attorney general, a race he lost to a Republican then known primarily for serving on the Texas Supreme Court: Greg Abbott. A few years later, he ran for the Texas Senate and won, going on to represent District 14 from 2007 to 2020.

In many ways, Watson is an archetypal politician. He’s gregarious, speaks with the slow, reflective cadence of a Texan, and is constantly scanning for the next opportunity to land a joke or share a story. As early as 2001, Watson was described by The Austin Chronicle as “Austin’s most charismatic politician since LBJ.”

When he announced his current run for mayor back in February, his two main opponents, Celia Israel and Jennifer Virden, had already declared. All three candidates are running on similar issues: housing and affordability. Where they differ are the particulars. Jennifer Virden has made cutting taxes and public safety pillars of her campaign while Israel has put a special emphasis on representing historically marginalized groups (she’s a gay Latina) and doubling down on Austin’s progressive values.

Ideologically, Watson is much closer to Israel – both served multiple terms as Democrats in the Texas Legislature – but the sheer length of Watson’s tenure in Central Texas has made him a symbol of the old guard. By 2014, one interviewer described him as a “fixture” of Texas politics.

In broad strokes, all three candidates’ proposals toward housing are very similar: cut through the red tape of permitting, reduce parking minimums and make it easier to build accessory dwelling units. Like Israel, Watson is in favor of the upcoming $350 million housing bond that will be on the ballot in November.

Watson’s messaging is positive, focusing on how far Austin has come since he left the mayor’s office in 2001. Even the way he frames the issues of affordability, homelessness and transportation is positive. “I’m very optimistic about Austin. Most of our big challenges are a result of success,” he tells the Austin Monitor.

Another point of emphasis: the virtues of working together. In a conversation with Mackenzie Kelly – the lone conservative and self-identified Republican on City Council – he told her, “I’ve always felt like labels reduce empathy.” An emphasis on setting aside labels has been a throughline of Watson’s career.

In 1999, Watson was Texas Monthly’s pick as the “Best Mayor for Business.” In an era when environmental issues loomed much larger in city politics, Bill Bunch, the director of Save Our Springs Alliance, was quoted in the piece as saying, “He’s turned environmentalists into developers and developers into environmentalists.”

In the world of Central Texas politics, Watson has a reputation as somebody who doesn’t just get things done, he gets big things done. Whereas most candidates running for office struggle with things like name recognition or getting voters to recall policies they had a hand in, Watson can literally point to the impact he’s had on Austin.

It’s up for debate how much credit Watson personally deserves for all these campaign talking points – and whether all of them are unilaterally positive.

One point of criticism is the integral role Watson played in the planned expansion of Interstate 35, an initiative that would cost at least $8 billion and involve the eminent domain acquisition of more than 100 businesses.

Critics point not just to the cost and scope of the plan, but to the fact that expanded highways don’t necessarily ease congestion, a point Watson himself has made in the past. “If you just go out there and build some new lanes, they’re going to be congested tomorrow,” he told KLRU in 2017.

Another point of contention is related to the role highways have historically played in dividing the city. The construction of I-35 is widely considered to have exacerbated racial and economic inequality in the city, a consideration Watson doesn’t take lightly.

He tells the Monitor, “I-35 has been a monument to racism in this town and in so many of our areas. We are appropriately trying to remove the sense that the systems that may be broken and the barriers that may have been created,” but also insists that Austin is only part of a broader region that includes cities like Georgetown, Kyle and Buda.

“If people want to drive their car and on I-35, we need to be able to get them into town, and while this (the highway expansion) will not be a panacea by any stretch, it will make a difference,” he says.

One place his transportation critics can likely find some common ground is Watson’s unwavering support of Project Connect, the city’s $10 billion, voter-approved investment in public transit. His support in bringing the project to fruition was not limited to a few statements or social media posts. Watson actively campaigned for Project Connect for years as all of the details were developing.

In the name of accountability and transparency, Watson is proposing biannual updates on the city’s transportation projects. “Get it done. Move on those kinds of things. But do it in a way that we’re being totally transparent,” he told KVUE back in May.

AHEAD OF THE PACK

Due to Watson’s prominence in Central Texas politics, he is the perceived front-runner. When campaign finance documents were filed by candidates in July, Watson revealed that he’d raised nearly $1 million, shattering the previous fundraising record two and a half times over. He’s also cobbled together a wide coalition of support including Council members Pio Renteria, Leslie Pool and Ann Kitchen, the Austin Board of Realtors, the Texas Restaurant Association, the Austin EMS Association, and the Austin Firefighters Association, among many others.

In a world where the default view of politicians is pessimistic, Kirk Watson is a noteworthy exception. He’s popular – and always has been.

In his first election for mayor in 1997, he got 48 percent of the vote, which normally would’ve pushed the race into a runoff, but before that could happen, his opponent dropped out. In every Texas Senate race since 2006, he’s gotten at least 60 percent of the vote in the general election.

Perhaps it’s this popularity that has fueled a few waves of intense criticism this election cycle; right now, Kirk Watson is the candidate to beat. “Things are going very well and everybody can see that. It’s one of the costs of being a front-runner,” he says.

In July, when he rolled out his housing plan, critics seized on one item in particular: letting individual Council districts adopt their own Land Development Code reforms. Detractors argued the proposal would allow the city’s affluent districts to block large-scale development, deepening inequality.

Soon thereafter, Celia Israel came out strongly against Watson’s proposal, comparing it to the explicitly racist practice of redlining. “It’s a throwback to decades past in Austin politics when the most politically active neighborhoods didn’t have to share power with their more marginalized neighbors,” she told The Austin Chronicle.

Watson insists the proposal is aimed at expediting development – and that it pairs with another tenet of his housing plan: rewarding districts that allow more development with funding for things like parks, pools and libraries.

More recently, Watson has received backlash for something that likely wouldn’t draw attention if he weren’t considered the favorite: a photo of a lawn sign outside his house taken in 2020. The sign was in opposition to CodeNEXT, the Land Development Code rewrite that City Council shot down in 2018.

To critics, the sign serves as proof that Watson isn’t serious about land use code reform. As with the rollout of Watson’s housing plan, Israel soon joined the criticism, saying, “We need a mayor who is not beholden to entrenched interests and who has the courage to challenge the status quo.”

Watson’s main opponents, Celia Israel and Jennifer Virden, have very different worldviews and visions for Austin, but they do have one important thing in common: They view Watson as the institutional candidate – an institution that hasn’t been able to adjust quickly enough to handle the city’s dire housing and affordability problems. Meanwhile, Watson suggests his institutional status and knowledge allows him to work at scale: “I offer myself as someone who has proven the ability to get things done.”

During his final meeting as mayor in 2001, in a municipal building on Eighth Street, the O. Henry Middle School Orchestra (which included his son) showed up to play a set for Watson. The final song was “For He’s a Jolly Good Fellow.”

Even in the twilight of his tenure, Watson’s charm was on full display. He broke parliamentary procedure during the meeting by removing an item from the agenda before giving a citizen a chance to speak on the matter. The agenda item put forward by then-Council Member Will Wynn was a resolution “blaming everything that has gone wrong in Austin since I was elected on Kirk Watson” – a joke between the two friends.

More than two decades later, Watson doesn’t miss a beat recalling the event. “Yes! It was damn funny,” he says, chuckling. Still, by removing the item before citizens could weigh in, Watson broke procedure. His tongue-in-cheek justification? “What are you gonna do, throw me out of office?”

As he left the municipal building that day to swear in incoming Mayor Gus Garcia, Kirk Watson handed over a city on the cusp of major transition. Around the turn of the last century, Austin was about two-thirds of its current size and was known for live music and weirdness – but even then, there were signs of what was to come. When Watson left office, the city was already crowned the “dot-com center of Texas,” had a record-breaking $1.3 billion in venture capital, and home prices had already started the trend of doubling every 10 years.

Today, Austin is still renowned for live music, weirdness and opportunities – but it’s also increasingly expensive to live in, difficult to commute in and struggles to house its most vulnerable residents. “Byproducts of really great success,” as Watson likes to say.

With four open seats on City Council this November, Austin is transitioning into a new era of leadership, one that Kirk Watson, the fixture of Central Texas, thinks he’s uniquely qualified to lead.