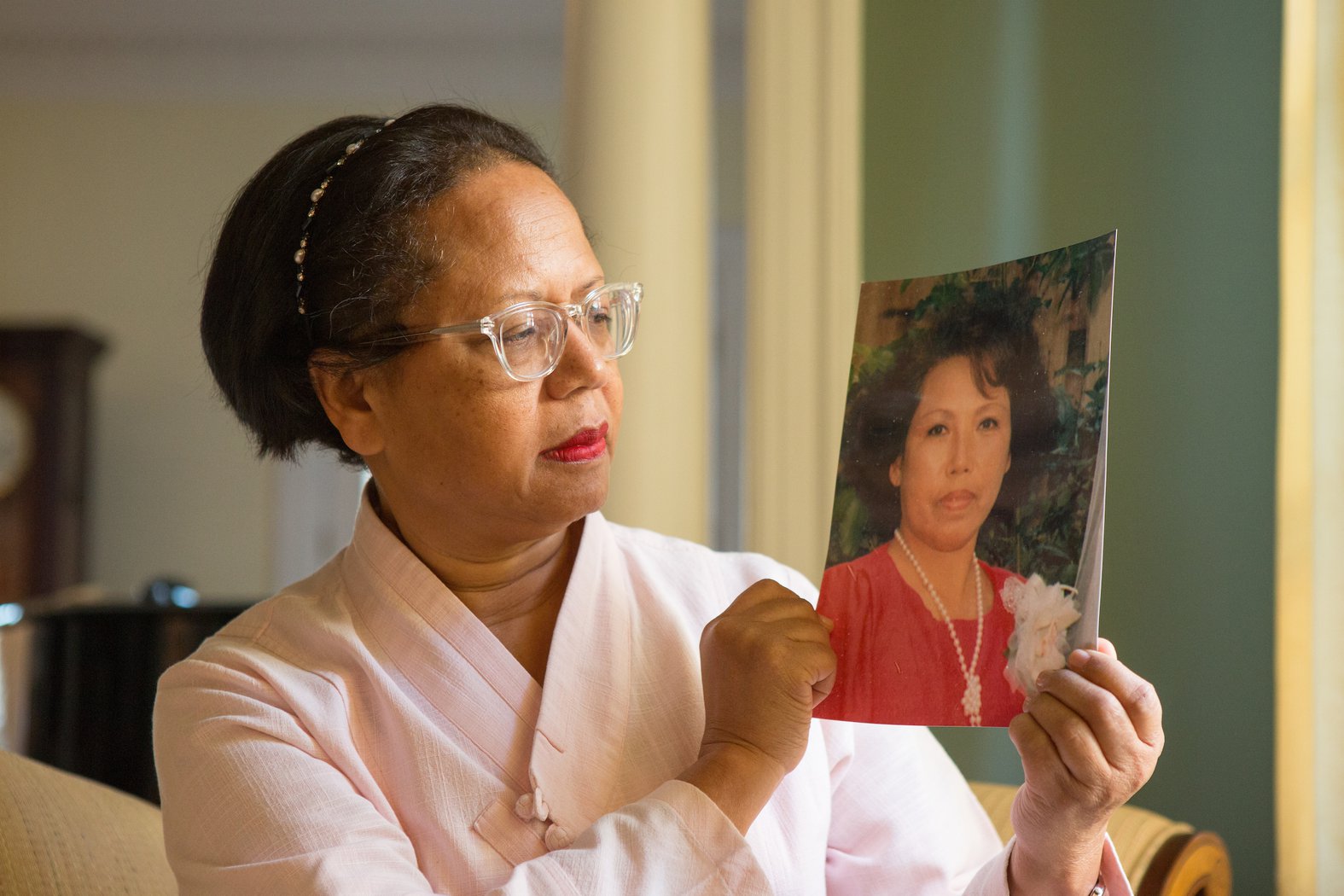 On Honolulu's famous Waikiki Beach stand four large stones that represent a Hawaiian tradition of healing and gender diversity that is all but unknown to the millions of locals and tourists passing by. According to legend, the stones are a tribute to four mahu, people of dual male and female spirit, who brought the healing arts from Tahiti to Hawaii and used their spiritual power to cure disease. Also available to stream on the PBS app.

At Lowell High School, San Francisco’s academic pressure cooker, the kids are stressed out. With a majority Asian American student body, high-achieving seniors share their dreams and anxieties about getting into a top university. But is college worth the grind? Also showing on Wednesday, May 4 at 6:30 p.m. on Austin PBS WORLD 18.3 or available to stream on the PBS app.

ALTERNATIVE FACTS: The Lies of Executive Order 9066 tells the untold story of false information and political influences which led to the World War II incarceration of Japanese Americans. The film also examines the parallels to the targeting of groups today and similar attempts to abuse the powers of the government. Also available to stream on the PBS app.

In the race for existence, striking teenagers discover that activism, authority and awareness make for a steep learning curve. Determined to provoke real action, New Zealand teenagers join the global School Strike for Climate. But planning a movement and building momentum are the easy parts as they face political indifference, their own white privilege, and the ongoing struggle to be heard. Meanwhile, the tides continue to rise. Also available to stream on the PBS app.

Narrated by Jason Momoa, discover the inspiring story and considerable impact of five-time Olympic medalist Duke Kahanamoku. He shattered swimming records and globalized surfing while overcoming racism in a lifetime of personal challenges. Showing again on Saturday, May 14 on Austin PBS WORLD 18.3 or available to stream on the PBS app.

Genuine New Zealand treasures Isey and her son James invite viewers into their lives in the week leading up to Isey's 100th birthday and its shaping up to be quite the party. The episode captures a Northland celebration of life and aroha (love) like no other. Also available to stream on the PBS app.

A compilation of stories from Decibel’s local coverage of the Asian community in Central Texas. A local artist finds a way to blend her worlds on the canvas. Then, Asian American DACA recipients share their stories. And how one man is keeping the tradition of nail salons alive. Also available to stream on the Decibel website.

Kelly Corrigan joins MSNBC / NBC news journalist Richard Lui to talk about selflessness and caretaking. When Richard’s father was diagnosed with Alzheimer’s, Richard made the difficult decision to work part-time to care for his father during his final years. Richard discusses how this experience with his father opened his eyes to the greater movement of caretakers in this country. Also available to stream on the PBS app.

Nadia Shihab's Jaddoland is an intimate portrait of the work and process of the director’s visual artist mother Lahib Jaddo. The film offers viewers a fresh look at the immigrant story in America. Through an exploration of her mother’s art and connections to her life in Texas, Shihab also drafts a unique picture of how art can help both the creator and the audience make sense of familial and cultural connections, loss, perseverance and life. Also available to stream with PBS Passport on the PBS app.

9 p.m. Sky Blossom: Diaries of the Next Greatest Generation on Austin PBS WORLD 18.3

During World War II, troops would look up and say, "Here come the Sky Blossoms" - paratroopers rushing to their aid. Today, a new generation is answering that call for help. This moving documentary, directed by Richard Liu and produced by Alex Lo and Donald Young, captures the stories of a generation of young people who are caring for their wounded veteran family members. Showing again at 9 p.m. Monday, May 30 on Austin PBS 18.1.

BETRAYED: SURVIVING AN AMERICAN CONCENTRATION CAMP tells the story of a group of Japanese Americans and their incarceration by the U.S. government during World War II. It also explores the long-term effects of this incarceration and the phenomenon of intergenerational trauma. More than 40 camp survivors and descendants bring an unparalleled immediacy and urgency to the story.

Discover the art, life and enduring impact of Tyrus Wong, the renowned Chinese-American painter behind Bambi and Rebel Without a Cause, via new and never-before-seen interviews, movie clips and art. Wong once exhibited with Picasso and Matisse.

BLOODLINE is an intimate profile of Vietnamese-American chef Tu David Phu and the evolution of his culinary aesthetic - borne from a bloodline that traces back through childhood and his family's unspoken history of war. The film's narrative is framed around Tu as he returns home to Oakland, California after competing on the cooking series Top Chef (Season 15). As he reflects on that experience and his new visibility as a celebrity chef, Tu traces his unlikely journey. From the son of refugees growing up in West Oakland to a professional chef, Tu's acclaimed culinary creations are heralded as the next wave of Asian fusion representing Vietnamese culture. The documentary features illuminating conversations between Tu and his parents on their initial reservations about his career path, their pride in his success in the food industry, and how their experiences during the Vietnam War influenced Tu's upbringing and cooking style. Beyond a personal examination of family ties and food heritage, BLOODLINE is also an exploration of how in placing a premium on pedigree and formal training, the culinary industry often disregards the rich experiences, flavors and practices falling outside those parameters. This is illustrated by how the physical bloodline of the fish - running down the middle of the fillet - is often thrown away by chefs even though it carries the animal's "essence." Also available to stream with Passport on the PBS app.

In Geographies of Kinship, the complex personal histories of four adult adoptees born in South Korea are weaved together with the rise of the country’s global adoption program. Raised in foreign families, each adoptee sets out on a journey to reconnect with their roots, mapping the geographies of kinship that bind them to a homeland they never knew. Also available to stream on the PBS app.

Exploring the survival of urban ethnic neighborhoods in three American cities: Washington, D.C., Chicago and Boston. Through the voices of residents, community activists, developers and government officials, the film looks at the forces altering each community and the challenges that go with them, including the pressing issue of urban development and gentrification.

A film directed by Li-Shin Yu and based on the critically acclaimed book Black Death at the Golden Gate. The death of Chinese immigrant Wong Chut King in San Francisco on March 6, 1900 would have likely passed unnoticed if the medical officer inspecting King’s body had not discovered a swollen black lymph node on his groin—evidence that the poor man’s rapid and painful death was the result of bubonic plague. Fearing the city would become the American epicenter of a disease that had already claimed 10 million lives worldwide, health officials drew upon racist pseudoscience to quarantine Chinatown. Local press and business and political leaders, meanwhile, conspired to cover up the threat in hopes of protecting San Francisco’s burgeoning economy. As the disease continued to spread, the new federal public health officer, Rupert Blue, became determined to save the city. Blue dedicated himself to tracking the epidemic, proving that the throngs of flea-infested rats that swarmed through the district—rather than simply urban filth or the foreign habits of the Chinese—were the true reason the disease persisted. He then launched a comprehensive sanitation campaign focused on rodent control as a way to combat the crisis—the first time in American history a federal health official began such a campaign. This film presents a complex and dramatic narrative of the desperate race to save San Francisco and the nation from the plague. Showing again on Saturday, May 28 on Austin PBS WORLD 18.3 or catch up on the PBS app.

Featuring the redemptive tale of waka builder and captain Lilo Ema Siope's final years, "Loimata, The Sweetest Tears" is a chronicle of journeys - journeys of migration, spirituality, voyaging, healing and coming home. Confronting intergenerational trauma head on, the Siope family returns to their homeland of Samoa. Also available to stream on the PBS app.

Weaving together never-before-seen archival footage and photographs, Chinatown Rising reveals a deeply personal portrait of a San Francisco neighborhood in transition. Chinatown activists of the 1960s reflect on their years as young residents waging battles for bilingual education, tenants’ rights and ethnic studies curriculum that would shape their community and nation. Also available to stream on the PBS app.

On Honolulu's famous Waikiki Beach stand four large stones that represent a Hawaiian tradition of healing and gender diversity that is all but unknown to the millions of locals and tourists passing by. According to legend, the stones are a tribute to four mahu - people of dual male and female spirit - who brought the healing arts from Tahiti to Hawaii and used their spiritual power to cure disease. Also available to stream on the PBS app.